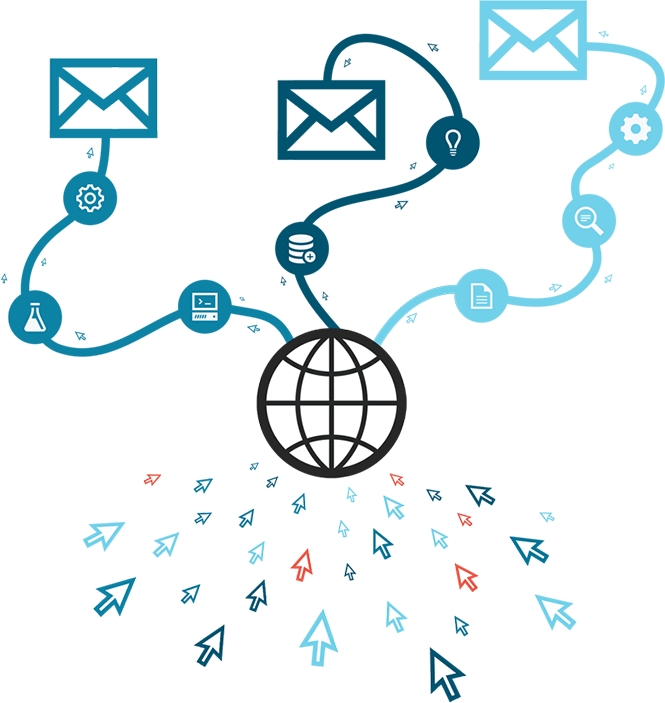 Michael Thomas founded and sold SimpleData. Today he writes for magazines like The Atlantic and FastCompany.

For Cabane, who calls himself Segment’s mad scientist, this was a simple optimization to measure. As long as the increase in volume was significant enough to outweigh the decreased conversion rate, he’d consider the automation a success. Four months later, when he ran his first report, he was astounded. Automation had risen into the top five sources of qualified opportunities at Segment. But he saw something else in the data that surprised him.

Rather than transition entirely to the new automated system, Cabane had decided to run an A/B test. He asked his coworker, Mark Miller, one of the company’s SDRs, to continue emailing prospects as he had for the last six months so he could compare the results. When he looked at the conversion rates, he realized that the automated email system was actually outperforming Miller in volume and efficiency.

Not only was he able to email four times as many people as the manual process could in a week, but he was achieving a 55% open rate and 13% response rate from a cold email.

At SimpleData, many of our customers asked whether or not automation was worth the investment. We’d describe the trade-off most companies make: volume usually goes up, but conversion rates go down; generally the output is higher in aggregate—the classic “quantity vs. quality” debate.

That’s why Segment’s results surprised me so much. They are the first company I’ve encountered that has actually been able to use automation to optimize both variables. Last month I sat down with the Segment team to take a look inside their most successful automation campaigns to date.

In terms of numbers, what’s interesting in the case of Segment—and it’s the case for many other B2B companies—is “while traffic is good, our conversion rate is pretty average,” Cabane told us. “In the range of a few percent, as it is for many SaaS infrastructure companies.”

One day, Cabane asked a fairly simple question: “What can I do to make them convert?” In each weekly growth meeting, he asks his team to suggest ideas, no matter how crazy they are. During that meeting, everyone tries to ignore limitations of cost or technological constraints. Then at the end of the meeting, everyone explores the possibility of the best ideas. One idea proposed in a meeting last year, by coworker Zeb Hermann, was the ability to email visitors that hadn’t converted. A couple of weeks later, Cabane built the following workflow.

After running the work flow a few times, Cabane realized that a high percentage of site visitors were bad prospecting targets.

He broke them down into the following groups:

Crawlers and Bots - Search engines and other spiders constantly index sites looking for changes. This is great for your SEO, but useless for outbound emailing.

Partners - Again, they are likely to be visiting extensively.

Your Customers - Even if they have already converted, they'll still use your homepage as a starting point to get to your dashboard.

The last group was one that Cabane wanted to avoid at all costs. “When I do outbound, I’d rather be safe than sorry. It’s usually okay to have some margin of error in growth experiments; in outbound, it is not okay to be wrong,” Cabane told me.

In order to avoid emailing customers, Cabane built extensive filtering into the workflow. Instead of wiring together five APIs, Segment used a customer data platform called Hull. This collected data from their SQL data warehouse (with all their signups), Salesforce (with all their customers), and the list of companies visiting the website (from Reveal) and merged it into one unified customer profile: a “master profile.”

With everything on one profile, Cabane could then spot and flag profiles from employees and partners to exclude. But to err on the side of caution, the job would also flag a domain from the list if anyone from that company had at any time signed up for Segment’s free product. In other words, if an engineer at IBM had signed up for an account two years ago, no one from IBM would ever be emailed through this automation workflow. In total, between 60% and 80% of the domains were filtered out. The remaining flag-free prospects were then added to a segment to sync to Customer.io into their automated outbound email cadence.

Once he had a new list of leads—a list that, unlike most, was refreshed each day—Cabane enlisted one of the company’s SDRs, Mark Miller, to help him find a way to write email templates that felt personal and delivered value.

One year prior, Miller had joined the company as one of its first sales reps. Being the youngest member of the team, he was given the unglamorous task of building lists and emailing prospects. Many of his days were spent searching Google and entering data into spreadsheets. “I vividly remember, before I switched over to Customer.io, there was an afternoon where I was trying to send my own outbound emails. I was sitting on a couch, and I had a list of companies, and I went to each one and would check out Ghostery to find out what technologies they were using. I would then go into the email that I was trying to send in Outreach, I would type in those technologies, and then I would press Send.”

It was an entire day’s work.

He ran into the same dilemma all SDRs face. “There are two huge challenges of doing outbound as an SDR, as a single person,” he told us. “The first is doing personalizations at a fast rate, and two, sending enough emails that you’ll get enough replies to then allow you to set up enough opportunities to then hit your quota.” Cabane’s new automation workflows promised to solve both of those problems.

Cabane told Miller that if implemented correctly, automation could help speed things up exponentially, but this type would also add personalization. By adding data such as a lead’s role or industry, the Reveal loop could take advantage of a wealth of data and pull it into Customer.io’s liquid logic. Then they could use if-then logic to programmatically build emails.

This allowed him to do personalization at scale. Personalization is how you get conversion. If the email doesn’t help the lead directly, then they have no need to respond. Therefore, Miller built the automated email just as he would as an SDR reaching out to a single individual he had researched thoroughly. Here it is, in its entirety, broken down by section below. 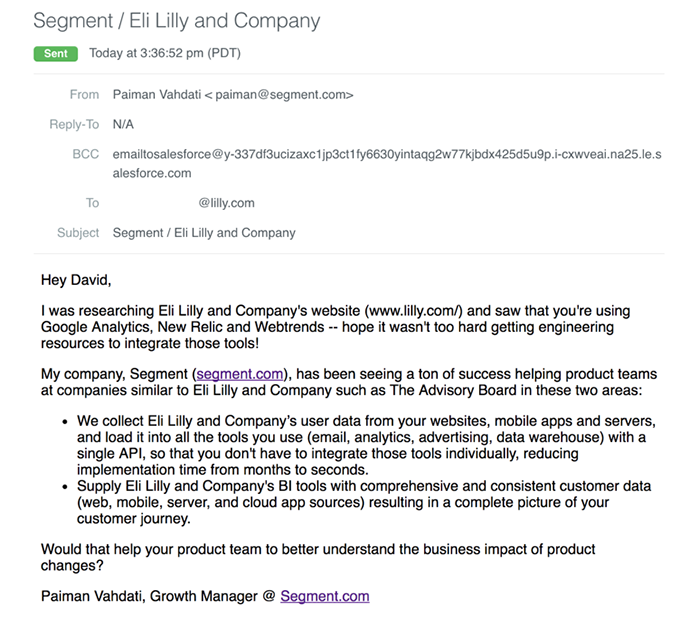 Introduction: Why are we contacting you?

I was researching Eli Lilly and Company’s website and saw that you’re using Google Analytics, New Relic, and Webtrends -- hope it wasn’t too hard getting engineering resources to integrate those tools!

There are three elements of personalization in this email. First, and most obviously, they reference the company’s name. This is standard practice among the best sales development teams, but it’s still important to note.

Second, they use enriched data to reference what technologies the company is using. This shows that the SDR has done research on their company.

And third, they use the lead’s role (job title) to reference a pain point they may have experienced recently. In this example, they email a product manager and reference the pain of getting engineering resources to help with data infrastructure problems.

My company, Segment, has been seeing a ton of success helping product teams at companies similar to Eli Lilly and Company such as The Advisory Board in these two areas: 1. We collect Eli Lilly and Company user data from your websites, mobile apps and servers, and load it into all the tools you use (email, analytics, advertising, data warehouse) with a single API, so that you don’t have to integrate those tools individually, reducing implementation time from months to seconds. 2. Supply Eli Lilly and Company’s BI tools with comprehensive and consistent customer data (web, mobile, server, and cloud app sources) resulting in a complete picture of your customer journey.

Miller calls this part “the pitch.” It’s the point in the email that he tells the prospect about his company’s value proposition. Once again, automation allows for personalization at scale.

First, by enriching the data to include a lead’s industry, Segment is able to reference similar companies in the industry. This social proof helps drive conversions, as the prospect is likely to recognize the company.

Second, by using the role data again, he can reference a pain point that a product manager has likely faced. This helps Miller pitch the right features to the right prospects.

Call to action: Making an ask

Would that help your product team to better understand the busi- ness impact of product changes?

By asking a question at the end of the email, the SDR has started a conversation. From there, it is their job to communicate with the prospect and try to convince them to see a demo.

There isn’t a long drip campaign to each lead, either. The sequence is just two emails. If there is no reply, they send one more email that includes a targeted case study based on their industry, determined automatically with their enriched data.

In this case, they would send a case study with a product manager at a technology company. Once again, this personalization ensures that Segment shows the most relevant value proposition to a lead. If the lead doesn’t reply, they aren’t contacted again.

So far the emails have been radically successful. Compared to industry averages of 30%, Miller’s automated emails have a 55% open rate. “It’s extremely efficient,” says Cabane.

After only four months of running the program, 22% of all qualified opportunities come to Segment through the Reveal loop. In addition, the revenue from this channel is predictable because it is correlated to their consistent website traffic.