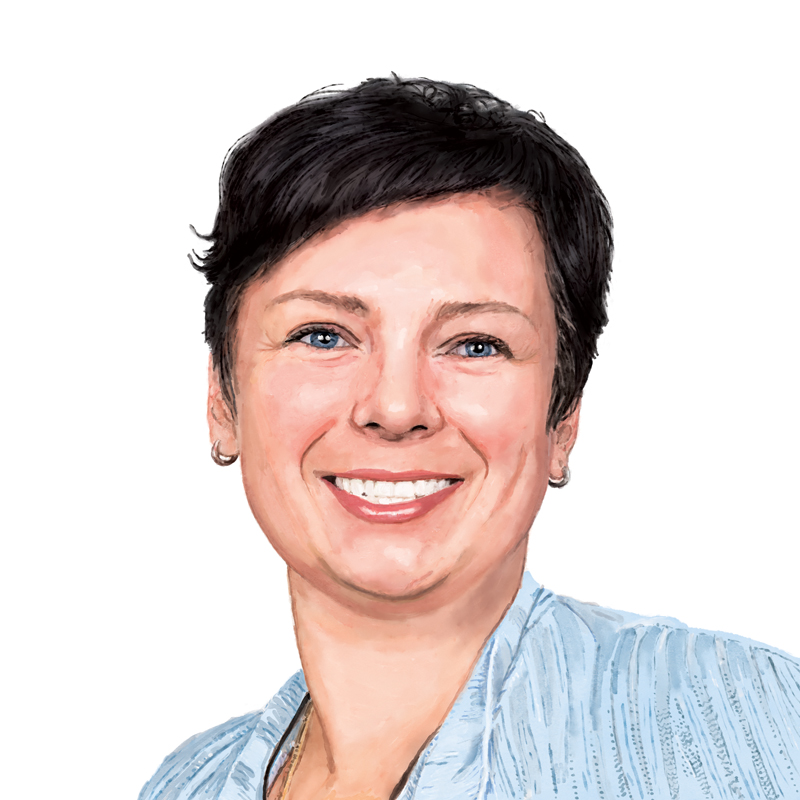 Maria Osipova’s marketing career was almost thrown out with the trash.

As a third-year college student with a resume of retail — Burger King, Zeller’s, Payless ShoeSource — she applied for a job as marketing assistant at MedTech, one of the world’s largest manufacturers of wristbands. Although a psychology major who specialized in consumer behavior, Maria had no formal marketing training or experience. When one of the company’s interns, tasked with screening the applicants, saw no mention of "marketing" on her resume, it went into a garbage bin.

Fortunately for Maria, the hiring manager was unimpressed with the interviewees and went scavenging for more promising candidates — and that’s where he found a gem.

"The first question he asked me was, 'Why marketing, of all things?'" she recounts. "As soon as I explained to him that consumer behavior is marketing, that’s when it clicked."

She ended up working consecutive co-op semesters at the company, winning the hearts of management and walking away with a glowing recommendation. The job kickstarted a career that, in 15 years, has seen her rise rapidly up the marketing ranks — culminating in her current role as VP of Marketing at Traction Guest, a Vancouver-based software company.

Maria, in her mid-thirties, speaks of her growth with equal parts humor and confidence. While her path to leadership has been smooth, it wasn’t always easy. From having to prove and educate herself in entry-level positions, to becoming a manager and learning to build a team, to striving and finally gaining the accountability she desired, her story is one of drive, determination, and a constant search for results.

Upselling from the fruit stand

Maria’s earliest marketing training took place at her grandparents' fruit and flower stand. If a car stopped in front of the stand, she would go outside and negotiate the price. Often she would convince customers to buy additional products.

"Looking back, that’s the first sign that I enjoyed marketing and sales," she says. "It’s where I began to understand that marketing is really a continuation of sales, and where I began to think about the dynamics around customers and consumer behavior."

As a teenager, she began a series of part-time retail jobs. Selling everything from ice cream and chocolates to men’s suits and private school uniforms, she formed a base for her later education in consumer behavior, gaining insight into buying decisions and how customers respond to sales messages and marketing strategies.

"In sales, you’re trying to understand a person’s challenges and address them in the best way possible to influence the outcome," she says. "I was doing those part-time jobs without any theoretical base for what I was learning, but I became passionate about consumer behavior."

She turned that passion into the focus of her studies at the University of Waterloo. Years later, she still benefits from her training in consumer psychology. By putting herself in the shoes of the customers and companies she’s selling to, she’s able to strategize effectively and create compelling messaging that communicates value.

Perhaps the most important part of her education was how it crystallized her career goals. As part of the school’s co-operative studies program, she spent all four co-op semesters working as a marketing assistant or marketing specialist. She remains grateful to MedTech for the opportunity to take part in major projects and rollouts to vendors like Walmart and Staples.

"Many co-op students at bigger companies get stuck doing faxes and copies," she says. "I got a chance to attend executive meetings and participate in the process. I found it all extremely exciting, and I knew at that point that I wanted to be part of it in a significant way."

More than just getting things done

By the time Maria graduated, she had no trouble finding a job as a marketing coordinator. The challenge instead became continuing her education and growing as a marketer.

Driven to one day be a leader, she knew that if she wanted to reach those heights she needed to develop her expertise. She began devouring books on marketing techniques and strategies. She attended HubSpot and other marketing conferences. She found inspiration listening to veteran marketers talk about their profession — how marketing is always evolving, what to expect in years to come.

Her ability to self-educate was tested in her first job after college when the video conferencing company she worked for assigned her to implement Salesforce. She had put "Salesforce data entry" on her resume, but that was the extent of her experience and no one else in the company was familiar with implementing the platform. Once again she picked up books and went to conferences, soaking up every available piece of information about administering Salesforce. She trained herself to be an admin and implemented a system that’s still used across the company today.

At the same time, she was expanding and sharpening her skills as a marketer, she was learning what she calls the most important lesson of her career: how to position and align marketing within an organization in order to produce the greatest impact.

For Maria, who lives and breathes words like "accountability" and "results," it was never acceptable, even early in her career, to work hard on a campaign only to hand it off and watch it fail. By taking the time to understand corporate goals and high-level deliverables, and by aligning priorities with those of other teams like sales and management, she could create a clearer path for the results she craved, leading to higher budgets and higher headcounts.

Today she encourages aspiring leaders, including young marketers, to "be part of the C-level conversation." Gaining trust and support from stakeholders across an organization, and aligning marketing activities very clearly with business goals and outcomes, she says, is the best way to gain influence and ultimately drive results from a marketing position.

"As a leader, it’s not just about getting things done," she says. "It’s about figuring out direction together with the corporate team and then aligning performance to hit that specific target."

The secret to management

Maria uses the words "straight line" to describe her trajectory as a marketer. She consciously built experiences, advancing systematically through the stages of her career: assistant, specialist, coordinator, manager, senior manager, director, VP.

In addition to majoring in psychology, Maria completed a minor in HR Management. She did so with the understanding that she would have a "fairly ambitious career" and one day manage people. The minor equipped her with a general understanding of how to build an organization, which she has supplemented by reading books on leadership and management. (Two she recommends: Patty Azzarello’s Rise and Richard Rumelt’s Good Strategy Bad Strategy.)

It was at QuickMobile in 2013 where she managed her first full team. She also had her first real mentor there, a CMO who she credits with teaching her not only how to assemble and lead a marketing team, but how to think and plan strategically at a high level.

"I wanted to become exactly the type of leader she was," Maria says. "To think from her perspective, build a team that would follow her anywhere, find and retain the best people in the industry, and think of the totality of the business as opposed to just the marketing function."

The best way to build a team, Maria says, depends on the organization. Managers at smaller companies with smaller hiring budgets should start by identifying key activities that align with corporate goals. From there, they should seek out employees who will complement their own skillset and help net those results that allow the company to grow and scale.

As a manager, one of the key lessons she took from QuickMobile is that managing well is more about goal-setting and strategy, less about watching over people and making sure work gets done on time.

Maria's secret to management is simple: "Hire people who are passionate and have huge aptitudes, who will put their own effort into learning and growing. If you do that and support them well, the rest will follow." In her experience, effective management is less about executing successful projects and campaigns, and more about helping shape lives and careers.

"If I were to measure my success managing an individual," she says, "it would be how much I was able to set goals that pushed them further and helped them grow."

On growing your influence

Maria's voice quickens and she becomes more animated when talking about ownership and accountability. It’s this hunger for results, developed early in her career, that drove her to advance beyond management and aspire to leadership.

At a high level, she defines management as short-term, focused on managing people. A director, she says, provides direction for the people within the company, while the VP has board-level responsibilities and is responsible for visioning 5 to 10 years into the future. "As a manager, you might have the most innovative campaigns and the best ideas about marketing, but you have little influence over defining the road map or results," she says. "At the director level, and especially the VP level, you’re accountable to the whole company."

She considers her time at MediaValet, where she worked from 2015 to 2019. The company had just separated from its parent company, and in Maria’s words, "There was no marketing or sales teams, and we were starting to build the brand." It was her first crack at being a true head of marketing — an opportunity to grow not only her skills as a marketer and leader but to take accountability and build something successful.

Earlier this year, she left MediaValet to join Traction Guest and faces new challenges. Having recently raised a significant round of funding, she will have new opportunities to scale her impact and team.

These days, Maria sees herself managing expectations not only for the marketing team but across the entire company. It’s a role that transcends marketing and offers maximum accountability.

When giving advice to new leaders, she returns to the lesson she learned early in her career: identify major priorities and build alliances to support them.

"It’s not just a single role," she says. "You have to build the areas of support outside of your division — especially if you’re new or bringing in a new team. Find those supporting areas, maybe within product, maybe within sales, so that when you’re trying to execute, you have people who trust you."

"I’m at the level of influence where I want to be," Maria says. Listening to her speak, hearing the passion in her voice, it’s easy to imagine the 21-year-old psychology student talking her way into a marketing career. The challenge is different now, but the drive is the same: to learn, to improve, to understand consumer behavior and create impactful, measurable results.

"I love marketing," she says. "I chose this career because I genuinely enjoy it. I read the books not because I need to get ready for the next board meeting but because I’m interested in what comes next."