Tim and the Directive Consulting team were up against aggressive revenue targets.

With high costs and a limited audience, LinkedIn was only getting the team so far. As Senior Director of Digital Marketing at Directive Consulting, Tim Davidson needed to find ways to reach more of the right people at a lower cost.

Directive Consulting is a customer generation agency that enables clients to generate quality leads and drive revenue by focusing on SQLs, pipeline, and customers, rather than MQLs and leads. The company has 150 employees across the globe focused on supporting hypergrowth B2B SaaS brands like Sumo Logic and SentinelOne.

Tim is the Sr. Digital Marketing Director at Directive. Tim’s key objective is to grow revenue by 10% month over month. “The goal at the end of the day is revenue. We have opportunity and SQL goals, but we can miss those as long as we are hitting our revenue targets” shares Tim. To achieve his goals, Tim needed to find new ways to grow existing paid programs.

Looking for new ways to scale beyond LinkedIn

Directive Consulting’s total addressable market (TAM) is fairly small at 4,900 accounts in B2B SaaS. With an account list in place, the team had a clear picture of who they were targeting, but they needed to figure out how to reach their target audience. Tim set out to build a paid program that would yield predictable and consistent results. He and the team found success with an offer on LinkedIn but ran into challenges trying to scale the program.

The Directive team offered prospects a $100 gift card in exchange for taking a meeting. Tim started running this campaign on LinkedIn and it took off, so much so that spend from this program now accounts for 80% of the marketing budget. Meetings were booked, and the sales and marketing teams were happy, but that’s not the end of the story. 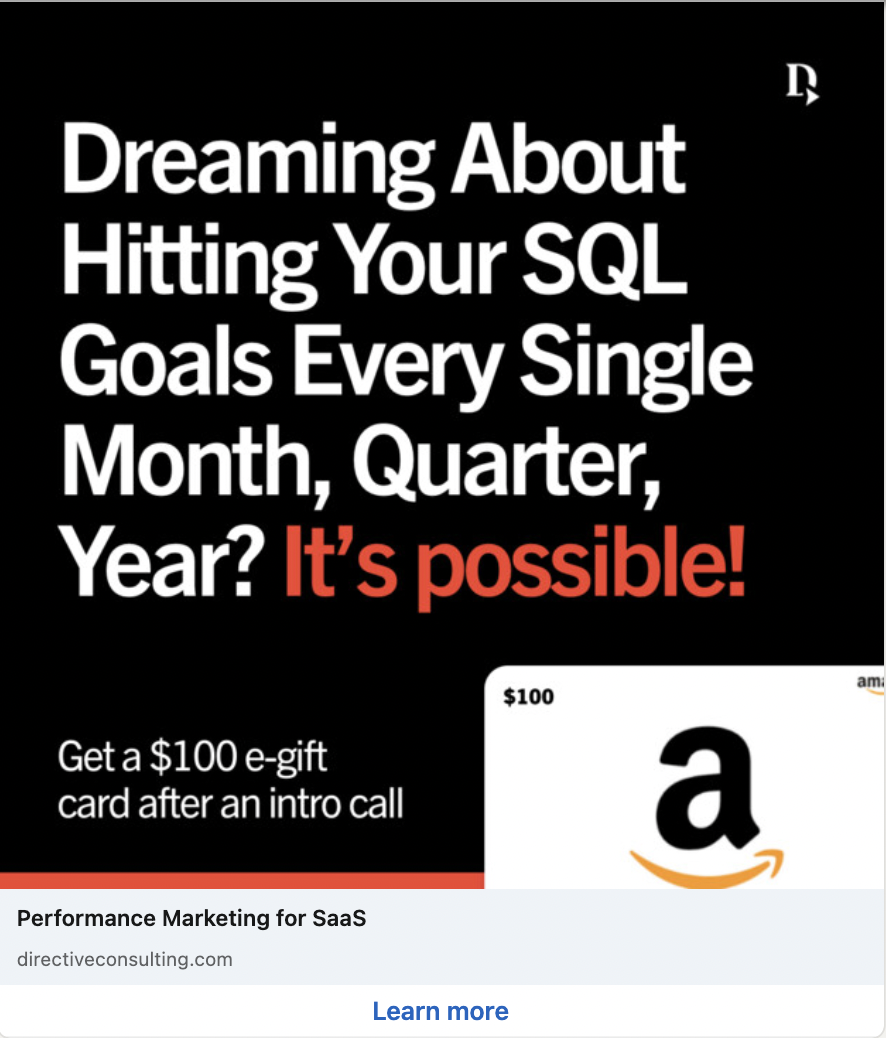 The Directive Consulting team wasn’t getting in front of as many people as often as they needed to hit their revenue targets. On LinkedIn, they saw declining efficiency from message ads since one person can only get one message every 30 days. For sponsored content, the cost per click (CPC) was expensive, hovering around $40.

With the high cost and limited exposure on LinkedIn, Tim decided to branch out to Facebook ads, hoping to tap into the platform’s larger audience. He also wanted to start utilizing Facebook to ensure he was diversifying his promotional mix and getting in front of prospects on multiple platforms. “We needed to find other areas. The problem is when you’re marketing to marketers they want you to be everywhere,” says Tim.

However, more challenges lay ahead. With limited native targeting options available on Facebook and Instagram, their initial ad campaign yielded poor quality leads. And, optimizing their Facebook ads was made more difficult by the iOS update requiring users to opt-in to tracking. Facebook wasn’t working as they had hoped, but Tim knew that they needed to capitalize on this channel to help the company scale.

Activating their ICP with Clearbit

Before launching the gift card campaign and using Clearbit Tim shares that “nothing was predictable.” He and the team saw an opportunity to optimize their ad programs and drive more revenue by working with Clearbit.

Tim was able to easily activate his ideal customer profile (ICP). He built an audience targeting individuals with titles of CMO, CRO, VP of Marketing, VP of Demand Gen, and Managers and Directors of Digital Marketing at B2B SasS companies. With Clearbit, Tim was able to get a lot more granular around attributes that mattered to him as a B2B marketer. Additionally, he was able to tap into Clearbit’s extensive dataset of more than 44 million companies and 350 million contacts, enabling the Directive Consulting team to reach more than just the contacts in their CRM.

After building these audiences, Tim was able to launch the ads directly on Facebook. Immediately he and the team saw that they were getting high-quality leads at a much lower CPC than before. And, the cost per opportunity was 63% lower than what they had been seeing with LinkedIn sponsored content.

As an added benefit, the omnichannel ad approach generated a lot of buzz. “Marketing to marketers, my goal is kind of to make them jealous,” says Tim. He frequently listened to sales calls and heard prospects share how impressed they were with the team’s Instagram ads. Overall from the new Facebook campaign, Tim and the team were able to generate $5.6 million in pipeline revenue. 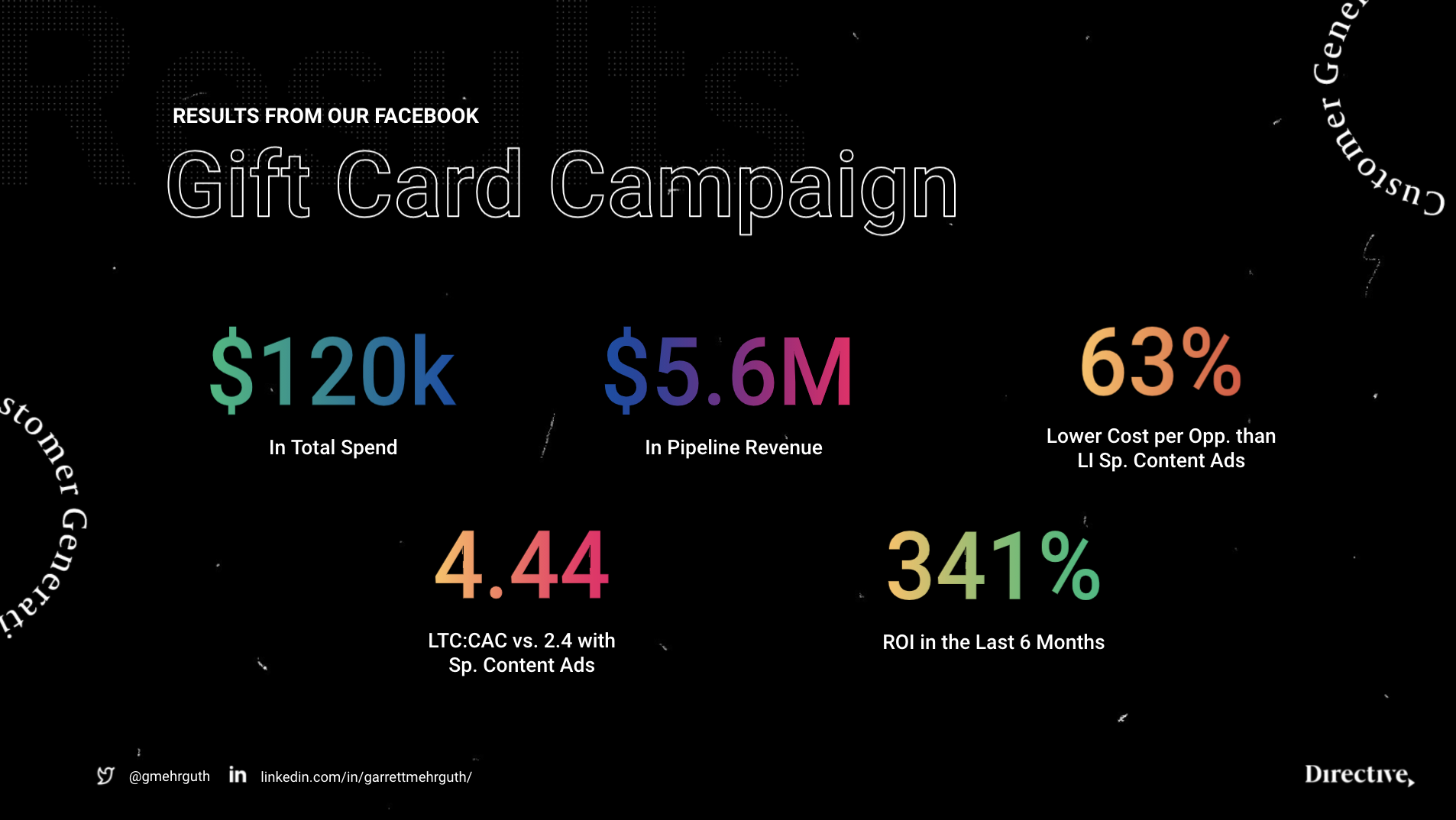 When someone visits the Directive Consulting website, Clearbit identifies the company, finds, and adds contacts from the marketing department at that company to Directive Consulting’s CRM, Salesforce. Then, those contacts are automatically fed back into Facebook campaigns, creating an ongoing and smart feedback loop. To start identifying anonymous companies visiting your site today, check out our free weekly visitor report.

With an optimized and effective Facebook ads engine in place, Tim and the team have been able to shift their focus to honing the messaging and offer. They have already tried, and seen success, by increasing the gift card offer from $100 to $105. And, Tim has more time to dedicate to listening to sales calls, which helps him uncover key pain points of his target audience.

While hitting revenue targets and building a predictable and consistent paid media program isn’t easy, Tim was able to achieve his goals (and more) with Clearbit. Simply put “Clearbit makes me feel cool and helps me scale,” shared Tim.

Directive is the customer generation agency for software brands.

See how the world's fastest growing-companies use Clearbit to power efficient revenue engines.